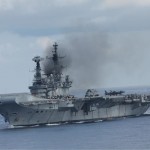 Cock Trophy during the Western Fleet Whaler Pulling Regatta, making it the last time the warship participated in the event before she is decommissioned. INS Viraat was declared overall winner team and awarded the trophy. In the keenly contested event, aircraft carrier INS Vikramaditya emerged runner-up. The winning ship will be called the Cock Ship till the next regatta.

Vice-Admiral S.P.S. Cheema, Flag Officer Commanding-in-Chief of Mumbai-based Western Naval Command, presided over the finals as the chief guest and also gave away the prizes to the winners. The whaler is a 27-foot-long boat that is rowed by five men called ‘pullers’ using 15 to 17-foot-long oars who cover a distance of 1.3 km. The teams practice hard for several months prior to the regatta. Read More