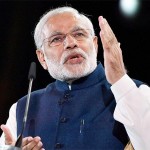 INS Sindhudhwaj, a submarine of the Eastern Naval Command (ENC), has been awarded ‘The Best Innovation Trophy’ by Prime Minister Narendra Modi.

The award was given as part of the Navy Day celebrations that concluded last week.

The innovation undertaken by the submarine to repair their ventilation system under challenging circumstances at sea during a search and rescue (SAR) operation was adjudged the first among the 137 entries of Navy, a release from the city-headquartered ENC said today. Read More