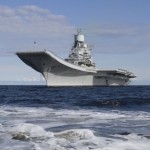 If we compare the three areas where there is military-technical cooperation between Russia and India; for the Army, the Air Force, and Naval requirements; the Navy’s is distinguished from the first two by its strategic character. It is quite clear that the cooperation began to take on this character during the Cold War years.