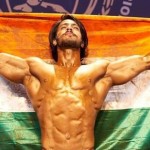 Television’s Dhritarashtra is now a world star. No, not for fathering a 100 sons or being torn between the principles of dharma and his love for his son Duryodhana, but for winning a gold medal in a world bodybuilding meet in Bangkok on Saturday. A former pilot, Thakur Anoop Singh has scripted a new high.
India’s Thakur Anoop Singh won gold medal in World Bodybuilding and Physique Championships

Thakur Anoop Singh’s journey has been truly remarkable. He has a pilot’s license but when the 2008 global recession hit the airline industry, he was forced to look at other options. Anoop decided to enter Fit Factor, which was India’s prominent model search competition. He made a good impression and finished as the runner-up. Read More