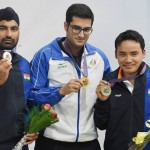 The gold medal in the 10 metre Air Pistol event was bagged by Boroujeni Safari of Iran with a tally shot of 198.7. It should be noted that this fourth medal India has won in 2015 Asian Air Gun Championship. Earlier, Abhinav Bindra had clinched the gold in the Men’s 10m Air Rifle event while Ayonika Pual won the bronze in the Women’s 10m Air Rifle event. Read More