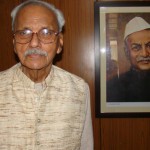 India’s former Ambassador to Nepal Bimal Prasad on 4 November 2015 passed away in New Delhi. He was 92.

Prasad, who was also a close aide of Jayaprakash Narayan, worked as professor of history at University of Patna. He also taught South Asian Studies at Jawaharlal Nehru University. Later, he served as the dean of School of International Studies.