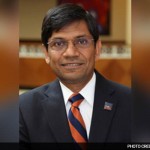 Mauli Agarwal, an Indian-American researcher has been named as a fellow of US’s National Academy of Inventors (NAI), He has been awarded for his work in inventing path-breaking health care technologies. Mr Agrawal, vice president for research at the University of Texas at San Antonio, will be formally inducted into NAI in April 2016. NAI named the 56-year-old researcher as a fellow for his outstanding work in orthopaedic implants, cardiovascular biomaterials and diabetic foot products.

An alumnus of the Indian Institute of Technology-Kanpur, Agrawal with his team is currently working with another San Antonio startup, Cardiovate Inc., which aims to repair damaged arteries. The technology involves placing a biodegradable plastic or polymer tube inside an artery to spur the body’s ability to naturally repair the artery. Read More