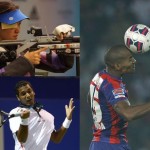 Tennis fans will also follow with keen interest the exploits of the star women’s singles pair of Sania Mirza and Martina Hingis. Sania won a total of 10 doubles titles in 2015, of which nine were with the Swiss superstar. Their list of conquests included a couple of Grand Slam tournaments in the Wimbledon and US Open.It will be interesting to see how the celebrated duo’s fortunes shape up this year. Since 2016 is an Olympic year, the focus will also be on the Indian men’s doubles and mixed doubles combinations at Rio. Sania is expected to partner the evergreen Leander Paes in the mixed doubles event.