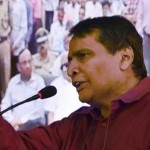 Railway Minister Suresh Prabhu on Sunday flagged off the inaugural service of the Goa-Mumbai double-decker air-conditioned Shatabdi train, which will run thrice a week between Goa’s Madgaon railway station and the Lokmanya Tilak Terminus (LTT) in Mumbai.

The train was flagged off from Panaji via video conference by Mr Prabhu, along with Goa Chief Minister Laxmikant Parsekar and union Minister of State for AYUSH Shripad Naik.

Speaking on the occasion, Mr Parsekar said the fully air-conditioned double-decker train was the first of its kind in the country and would help in boosting tourism. Read More