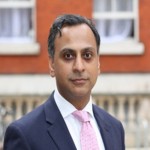 Ajay Sharma, an Indian-origin diplomat, will be the new British Ambassador to Qatar.
Mr Sharma, currently the charge d’affaires to Iran, will take up his new assignment in November, an official release said.
He will succeed Nicholas Hopton, who will be transferred to another post, according to a release on UK government’s website.
Mr Sharma has earlier served as the Foreign & Commonwealth Office (FCO) Head of Iran department and non-resident chargA© d’affaires to Iran. Read More