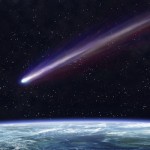 A study by an international team from Europe and the US led by an Indian planetary scientist has resolved one of the mysteries that baffled astronomers. Astronomical studies have shown that several small bodies – Centaurs and Trans-Neptunian Objects (TNOs) – in the outer solar system are having surfaces that are extremely dark but the origin of this colour had remained unclear.Centaurs estimated to number around 44,000 are minor planets with diameters larger than one kilometre. And TNOs are similar objects at a distance farther than Neptune, the most distant planet in the solar system.