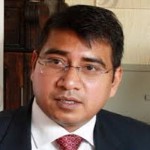 Biraja Prasad, who was posted recently as Ambassador to Tajikistan, passed away on Saturday following a massive cardiac arrest. Mr. Prasad, who belonged to Odisha, suffered a heart attack during sleep, family sources said here.Prasad, a career diplomat, had joined the Indian Foreign Service in 1998. He had held different diplomatic assignments such as third secretary and then second secretary (Political) in Embassy of India, Moscow (Russian Federation) from 2000 to 2002 and Second Secretary (Political and Commercial).