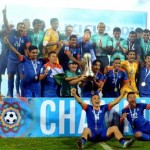 India defeated Afghanistan 2-1 to clinch the SAFF Cup for the seventh time. Sunil Chhetri and Jeje Lalpekhlua scored for hosts after Zubayr Amiri gave the defending champions the lead. The Indian team has exacted a sweet revenge of their last edition defeat. India lost to Afghanistan 0-2 in the final of 2013 edition in Kathmandu. Jeje Lalpekhlua (72nd minute) and Sunil Chhetri (101th) scored for India after Zubayr Amiri had given Afghanistan the lead in the 69th minute at the Greenfield Stadium.

The victory for 166th ranked India over higher ranked Afghanistan (150th) gave Constantine his first win of an international tournament after taking charge early last year for his second stint at the helm of affairs in India. Read More