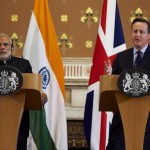 India and the UK on 12 November 2015 announced commercial deals worth 9 billion pounds in London. The deals took place between the companies operating from both the countries and were agreed upon during the Prime Minister Narendra Modi’s visit to the UK.Merlin Entertainments: It will open the first Madame Tussauds in the sub-continent. It will be set up in New Delhi in 2017. Further, it will invest up to 50 million pounds over 10 years to open more of company’s iconic brands that include Discovery Centre and Sea Life Aquarium.
• Apollo Hospitals: It partnered with Holland & Barrett Internationalto open 1000 Holland & Barrett outlets in India over the next 5 years. The first store will open in New Delhi in January 2016 with 115 outlets open at the end of the year.
• Genus ABS will invest 1 million pounds in India providing the latest dairy genetics and constructing a state-of-the-art facility near Pune in Maharashtra…Read More