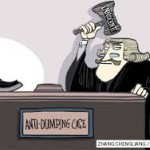 GOI has initiated a probe into alleged dumping of rubber variants used for leather goods by the EU, South Korea and Thailand. The Govt initiated after complaints from Reliance Industries and Indian Synthetic Rubber. The move is aimed at protecting domestic players in the sector against cheap imports. The Directorate General of Anti-Dumping and Allied Duties (DGAD), an arm of the Commerce Ministry, has begun investigating imports of Styrene Butadiene Rubber (SBR) of 1,500 series and 1,700 series from these three regions.