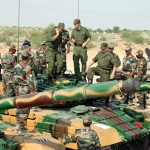 The seventh edition India-Russia Joint Military Exercise ‘Indra-2015’ has begun in Bikaner district of Rajasthan. This edition of exercise is focusing on ‘Counter-Terrorism Operations in Desert Terrain under a United Nations Mandate’.
The key facts are that the bilateral exercise would be held between Indian Army’s Infantry Battalion and Independent Russian Motorised Brigade from 7 to 20 November 2015. It would be conducted 2 phases, namely ‘Combat Conditioning & Tactical Training’ and ‘Validation’ phases. Both participating battalions would initially acquaint themselves with each other’s counter-terrorism approaches including Command and Control systems, operations, arms and equipment. Read More