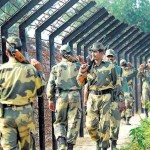 The Cabinet Committee on Security cleared a massive infrastructure project for the Bangladesh border last week, a senior official told The Hindu. Projects worth Rs. 4,400 crore were cleared by the CCS headed by Prime Minister Narendra Modi last week, but no announcement was made by the government.

Cross-border migration has been high on the agenda of the NDA government and it was one of the major poll issues before it came to power. Till August this year, the Border Security Force intercepted 1,731 Bangladeshi nationals trying to cross over to India.

The CCS has cleared around 200 km of fencing along the border. Sanction has also been given to construct a 400-km road in the border areas. Read More