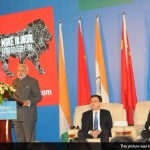 An Indian culture week was inaugurated today at ChinaShanghai International Arts Festival where India has been designated as a guest country for the first time.

The India culture week called “India in Shanghai” was inaugurated by Indian Ambassador Ashok K Kantha along with Zhong Yanqun, Vice Chair of The Standing Committee of the Shanghai Municipal People’s Congress, Indian Consulate in Shanghai said in a statement.

The inauguration was attended by leading government officials from Shanghai and neighbouring cities, leading personalities from the field of art and culture, heads of local newspapers and television channels, members from universities and think tanks, representatives of Chinese and Indian companies as well as leading members of Indian diaspora, the statement said. Read More