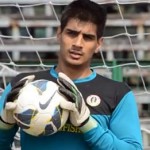 Goalkeeper Gurpreet Singh Sandhu has added another feather to his cap by ensuring that he would be the first from his country to be part of a team scheduled to play in the Europa League next season. Eight months ago he created history by becoming the first Indian footballer to play for a first division European club. Sandhu, who has played 20 odd reserve team matches for Stabaek besides the maiden first team Cup game, is obviously very excited about soaking in the Europa experience.