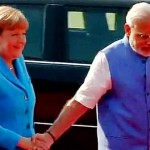 India and Germany have signed around 18 agreements and memorandum of understanding (MoUs) in various sectors. These agreements were signed at the end of third edition of Indo-German Inter-governmental Consultations (ICG) in New Delhi. The Indo-German ICG was co-chaired by Prime Minister Narendra Modi and his visiting counterpart German Chancellor Angela Merkel.

Some important agreements signed are

Joint Declaration of Intent (JDI) on Languages: It seeks to promote German as a foreign language in India and promote modern Indian Languages in Germany. Read More