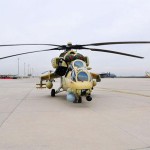 India has delivered three Mi 25 attack helicopters to Afghanistan, in what is seen as a shift in its strategy towards the strife-torn country. The three such choppers have already been delivered to the Afghan government, which will boost its capability against Taliban terrorists. The choppers were taken to Afghanistan in a C-17 transport aircraft of the Indian Air Force.

While Afghanistan has repeatedly sought India’s support in beefing up its military’s fighting capability in terms of machinery, India had shied away till now. The development came after the recent visit of Afghan National Security Adviser Mohammad Hanif Atmar to New Delhi. Read More