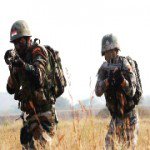 India-China Joint Military Training Exercise Hand in Hand 2015 concluded at Kunming Military Academy in Yunnan province of China. It was fifth edition of the exercise between the two countries which had started on 12 October 2015. The 12 day exercise concluded with a Joint Field Exercise between armies of both countries followed by a closing ceremony. Key Facts Participating troops from both sides learned and trained together from each other in mixed groups on Basic Individual Skills and Comprehensive Combat Skills. The joint exercise also met its stated objectives by exchanging experience on counter-terrorist training and conducting counter-terrorist operations …Read More