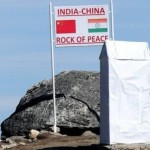 The border troops of India and China held their first joint tactical exercise in the Chushul-Moldo area along the northern border. This is part of the ongoing initiatives taken by India and China to ensure greater interaction between troops stationed along the Line of Actual Control, and thereby ensure peace and tranquillity along the border. “As previously agreed by both countries, the exercise focussed on actions to be coordinated to tackle jointly aspects of humanitarian aid and disaster relief,” the Army said in a statement.