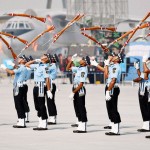 Significance of Day: It was celebrated for first in 1932 as an auxiliary air force of Indian Empire. The celebration of day seeks to increase the awareness about the importance of IAF as an important part of the national security.

Celebrations: The Air Force Day Parade was held at the base along with the investiture ceremony. The Air Force Warrior drill team including women officers displayed rifle handling skills along with march past as part of the parade. Various airplanes of the IAF were on display. Read More