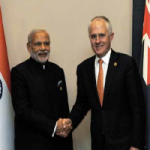 India and Australia on 15 November 2015 announced completion of procedures for bringing the two-nation nuclear deal into force. The deal was finalized at the bilateral meeting between Prime Minister Narendra Modi and his Australian counterpart Malcolm Turnbull on the sidelines of the G-20 Summit at Antalya in Turkey.With the completion of procedures, including the administrative arrangements, India-Australia civil nuclear agreement will enter into force and India will be the first country to buy Australian uranium without being a signatory to the Nuclear Non-proliferation Treaty…Read More