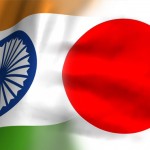 India and Japan have signed an MoU on 12th December, 2015 on cooperation and assistance in the Mumbai – Ahmedabad High Speed Rail Project (referred by many as Bullet Train project). The two countries have also entered into two comprehensive technological cooperation agreements on 11th December 2015, for modernization and upgradation of Indian Railways.

These agreements have been signed during the official visit to India of His Excellency Mr. Shinzo Abe, the Prime Minister of Japan, during December 11 – 13, 2015.

The details of cooperation envisaged in the three Memorandums are as follows: Read More