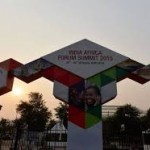 From a rose garden to Gandhi’s Africa connect, to Modi jackets, the Narendra Modi government has put in everything but the kitchen sink to ensure the Third India-Africa Forum Summit is the most successful multilateral event ever held in India.With over 40 African heads of state and government confirming attendance, the event is being seen as India’s most successful outreach ever to the resource-rich continent which has all major powers vying for influence. Given the time and attention he has spared for the summit, Modi is looking to use his personalised style of diplomacy to not just make the event memorable but to also prove that foreign policy remains his strong point despite recent reverses in the neighbourhood, most notably in Nepal.
The summit starts on Monday with a senior officials’ meeting, foreign ministers meet the next day…Read More