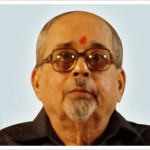 Iconic Marathi poet and Padma Bhushan recipient Mangesh Keshav Padgaonkar has passed away at the age of 86. Mr. Padgaonkar had 40 publications to his credit. The U.S. Library of Congress has acquired 31 of his publications. He has written a collection of essays and published it under the title Nimbonichya Zaadamage. Mr. Padgaonkar translated works of Mirabai and published a book Mira in 1965. He also translated works of Kabir and Surdas in Marathi along with Shakespeare’s plays The Tempest, Julius Ceasar and Romeo and Juliet.

Born on March 10, 1929 in Vengurla, Sindhudurg district in Maharashtra, he received a Master of Arts degree in Marathi and Sanskrit from the University of Mumbai. Read More