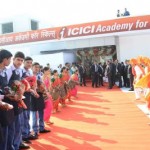 After completing class X, Velmurugan, son of a coolie at Potharai village in Thiruvanammalai district moved to Chennai to eke out a living. A building contractor engaged this young lad for some time, but Velmurugan could not sustain for long.He then joined his uncle – an electrician as his assistant. But Velmurugan found that he was not earning enough to make two ends meet.