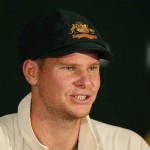 Australia captain Steven Smith has won the top ICC awards for 2014-15, being named Cricketer of the Year as well as Test Cricketer of the Year. Smith became the seventh player after Rahul Dravid (2004), Jacques Kallis (2005), Ricky Ponting (2006), Kumar Sangakkara (2012), Michael Clarke (2013) and Mitchell Johnson (2014) to bag both awards in the same year. Smith was “thrilled” to receive the awards, but said he would end 2015 with “mixed feelings”. He becomes the fourth Australian to lift the Sir Garfield Sobers trophy afterRicky Ponting,Mitchell Johnson and Michael Clarke.