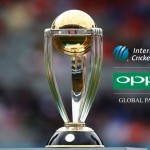 The International Cricket Council (ICC) has announced an exciting new global partnership with OPPO, one of the world’s leading mobile telephone device companies, on a four-year deal which runs from 2016 until 2020.

Launched in China in 2004, OPPO is a young and dynamic company and has already established itself as one of the world’s leading electronic and technology service providers. It has a strong presence in more than 20 countries and a significant number of regions worldwide, including Australia, China, USA and right across Africa, Europe, the Middle East, South Asia and Southeast Asia. Read More