Institute of Banking Personnel Selection (IBPS) established in the year 1975 is an autonomous agency in India and an independent entity at the purview of Reserve Bank of India (RBI) and Public Sector Banks.

IBPS is  self-governed academic and research oriented Institute for which  the main objective is to enhance the human-resource development through personnel assessment. IBPS in order to select the officers and clerks in Indian banks conducts  a Common Written Examination (CWE) which is now mandatory for anyone who seeking a job in one of the 20 public sector and Regional Rural banks. 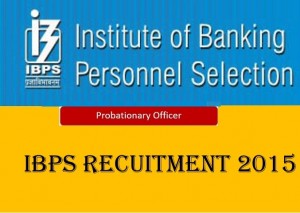 IBPS every year conducts the CWE examination for various posts in the Govt banks and like every year this year also IBPS released notification for the post of probationary officers/Management trainees and also partially completed the preliminary examination successfully which is scheduled on October 4th, 5th, 10 and 11th.

Now the latest news is that the main examination for the IBPS PO/MT is tentatively scheduled to be held on October 31st, 2015 after declaration of prelims result.

The candidates those who have qualified in the prelims examination of IBPS PO/MT will only become eligible to appear for the main examination.