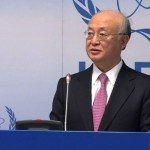 The global nuclear watchdog, the IAEA, has ended its 12-year investigation into concerns that Iran might be developing nuclear weapons.

The move is seen as a key step towards lifting UN, EU and US sanctions.

The IAEA concluded that Iran conducted nuclear weapons-related research until 2003 and to a lesser extent until 2009, but found no evidence of this since.

The lifting of sanctions, agreed in a July deal with world powers, hinged on the IAEA’s findings on the issue.