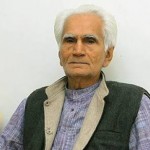 Noted Gujarati writer Raghuveer Chaudhary has been selected for the 51st Jnanpith award for his contribution to Indian literature. A novelist, poet and critic, Chaudhary is a recipient of Sahitya Academi Award for his novel, “Trilogy Uparvaas” in 1977. His popular novels include “Amrita”, “Venu Vatsala”, “Purvarang”, “Laagni Samjyaa Vinaa Chuuta Padvanu” and others. While his most-known novel “Amrita” (1965) explores the concept of existentialism, other works like “Rudramahalaya” (1978) and “Somtirth” (1996) are historical fiction.

A Gandhian, Chaudhary, 76, has also worked as a columnist for many newspapers, such as Sandesh, Janmabhumi, Nirikshaka and Divya Bhaskar. He served as a teacher at the Gujarat University until his retirement in 1998. Read More