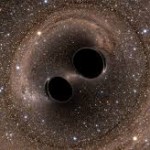 Physicists accross the globe have confirmed that it has been proved that unambiguous signals of gravitational waves emanating from the collision of two massive black holes 1.3 billion light years away in deep space is very true.They are happy that the highly elusive ‘gravitational waves’ have finally been detected. Understandably, and justifiably, there is great elation within the global physics community, astrophysicists and cosmologists in particular. Hundred years ago, Albert Einstein had already predicted it.  Now, the scientists working with the gigantic optical instruments in the U.S. called LIGO [Laser Interferometer Gravitational-wave Observatory], have detected signals of gravitational waves emanating from two merging black holes 1.3 billion light years away arriving at their instruments on the Earth. That is to say, this cataclysmic event of two black holes merging occurred 1.3 b yrs ago, when multi-cellular organisms were just beginning to form on the Earth, the gravitational waves from which are being received now on the Earth.