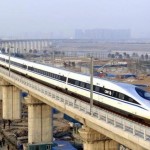 India’s cabinet has cleared a $14.7 billion Japanese proposal to build its first bullet train line, an Indian government minister and official said on Thursday, one of India’s biggest foreign investments in its infrastructure sector.

The decision ahead of Japanese Prime Minister Shinzo Abe’s visit beginning on Friday gives Japan an early lead over China, which is also bidding to build high-speed rail lines across large parts of India’s congested and largely British-era system.

Japan had offered to finance 80 percent of the cost of the train linking financial capital Mumbai with Ahmedabad, the commercial centre of Indian Prime Minister Narendra Modi’s home state of Gujarat, at an interest rate of less than 1 percent. Read More