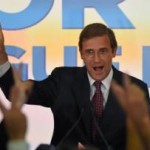 Governing Centre Right coalition parties led by Prime Minister Pedro Passos Coelho have won the Portugal’s 2015 general election. In this election the governing coalition has won 99 seats in the 230-seat parliament by securing 39% of votes. However they failed to secure absolute majority in the Parliament.

Socialist Parties have emerged as opposition in this election and have secured 32 per cent vote share. The leader of the opposition Socialists Antonio Costa has admitted defeat.

It should be noted that in this election, parties to the left of the Socialists have achieved their best-ever result. Left Bloc has won 10% of the vote share and secured 19 seats, while the Communists won 8% of the vote share. Read More