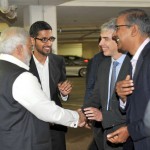 Search engine giant Google has announced to provide high-speed public Wi-Fi in 400 Indian railway stations. To set up public Wi-Fi hotspots, Google is working with the Indian Railways and RailTel, a government-owned provider of telecommunications infrastructure to the railways. The project will be implemented in phased manner and initially it will cover 100 of the busiest stations in India before the end of 2016. The first stations are expected to come online by end of October 2015. The internet service will be offered free initially with an aim to make the project self-sustainable in order to provide Wi-Fi to more stations and other places. Once this project is implemented successfully it will benefit around 21 million passengers of Indian Railways. Presently, India has about 300 million people online or having internet connectivity. Read More