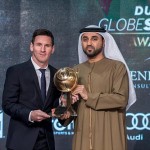 The Globe Soccer has presented the sixth edition of Globe Soccer Awards 2015 to the winners at a ceremony held in Dubai, UAE. Awarded for excellences in the field of football, Globe Soccer Awards are the first and only awards for the Best Club Director and the Best Agent of the Year. The awards conferred were based on the performance of the players and football clubs in 2015.

Globe Soccer was created and built by BC Bendoni Consulting to facilitate intercontinental dialogue among the main players in the football world, with opportunities to meet and discuss for the game’s institutions, clubs, leagues and transfer market operators. Read More