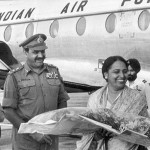 General Om Prakash Malhotra has passed away due to old age at the age of 93 years at his residence in Gurgaon. He was the 13th Chief of Army Staff of the Indian Army from 1978 – 1981, the Ambassador of India to Indonesia from 1981 – 1984 and Governor of Punjab and Administrator of Chandigarh from 1990 – 1991.

The General was born in Srinagar, Kashmir, on August 6, 1922 and received his schooling first at Model High School, Srinagar and later at SP Higher Senior Secondary School, Srinagar. Read More