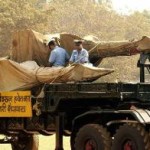 The next-generation Barak surface-to-air missile (SAM) system, jointly developed by Israeli Aerospace Industries, Rafael and DRDO, was successfully tested for the first time from an Israeli warship against a jet-powered drone on Thursday.

The supersonic Barak-8 missile system, whose interception range has been increased from the earlier 70-km to around 100-km, will be now tested from Indian destroyer INS Kolkata “within a month”, said sources. Read More