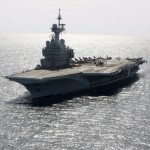 Its involvement in the campaign will shorten the time it takes for French jets to carry out air strikes.

France has been targeting IS in Iraq as part of the US-led coalition since September 2014. In September this year French forces began air strikes in Syria.

The Charles de Gaulle aircraft carrier has already been deployed against IS.

The ship – France’s only such vessel – was used as a base for French jets in the Gulf from February to April. Read More