Former US senator and actor Fred Thompson passes away 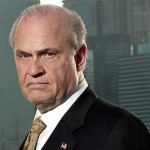 Fred Thompson, a former U.S. senator for Tennessee and actor, has died at the age of 73. Thompson died after a recurrence of lymphoma. He was first diagnosed with non-Hodgkin’s lymphoma more than a decade ago.

He was known for his acting roles, including playing himself in 1985’sMarie. Other memorable roles included his part in 1987’s No Way Out starring Kevin Costner and the part of New York District Attorney Arthur Branch on the television series Law & Order from 2002 to 2007. Thompson, 6-foot-6 with a booming voice and folksy demeanor, appeared in at least 20 motion pictures. Additional credits includedIn the Line of Fire, The Hunt for Red October, and Cape Fear.

Once regarded as a rising star in the Senate, he retired from the seat when his term expired in January 2003, saying he didn’t “have the heart” for another term. He announced a bid for president in 2007 but dropped out in 2008 after faring poorly. In 2002, Thompson chose not to run for re-election and took the role of his family.