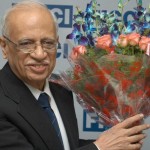 Old soldiers never die, they just fade away, runs an old army ballad. One was tempted to use that comparison when it came to S.S.Tarapore, the redoubtable former deputy governor of the Reserve Bank of India. Except, that it is not true. He died this morning. He was 80. And no, he didn’t fade away – as so many other grey eminences do, when they retire. A career central banker, Tarapore joined RBI as a research officer in 1961 and demitted office as Deputy Governor in September 1996.