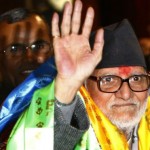 Nepali Congress President Sushil Koirala breathed his last in the wee hours of Tuesday morning, succumbing to Pneumonia,. Koirala was suffering Chronic Obstructive Pulmonary Disease (COPD). Koirala was elected Prime Minister of Nepal on February 10, 2014. Sushil Koirala was elected from Banke and Chitwan constituencies in the second Constituent Assembly election of 2013, November 19.  A devoted member of the Nepali Congress party of which he is currently president, Koirala once spent three years in an Indian prison for his involvement in the hijacking of a plane.

Read More At The Doordarshan