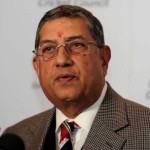 Former BCCI President N Srinivasan has been removed from his post as ICC chairman, reports an English news channel. The decision was taken at the BCCI AGM on Monday in Mumbai. Consequently, Shashank Manohar’s name has been put forward as the new ICC chairman.

With this decision, the saga of N Srinivasan’s stranglehold over Indian and world cricket comes to an end.

The BCCI is holding its 85th Annual General Meeting in Mumbai on Monday. The issue of N Srinivasan’s post as ICC chairman was considered high on the agenda. Read More