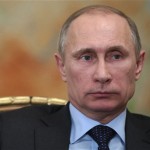 Vladimir Putin has been voted the most powerful person in the world for the third time in a row, in a new list published by financial magazine Forbes. The Russian President has topped the Most Powerful People list, with German Chancellor Angela Merkel and US President Barack Obama coming in second and third place respectively.  It is the first time a sitting US President has not made one of the top 2 spots. Pope Francis has retained his fourth place position from last year, while General Secretary of the Communist Party of China’s Xi Jinping is at number five, having fallen two places. Prime Minister Narendra Modi has been ranked as the world’s ninth most powerful person.

Others in the top ten are Microsoft Founder Bill Gates at the sixth place, US Federal Reserve Chairperson Janet Yellen (7), UK Prime Minister David Cameron (8) and Google’s Larry Page(10). Factors such as the amount of money the individual controls, the number of people they impact, ‘spheres of influence’ and how the figures use their power are all taken into account when putting together the 73-person strong list. Read More