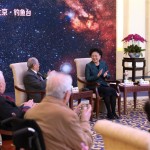 A total of five minor planets have been named after top Chinese scientists, including the country’s first Nobel laureate scientist Tu Youyou. The naming was suggested by the National Astronomical Observatories of the Chinese Academy of Sciences (CAS) and approved by the International Astronomical Union (IAU) Minor Planet Center (MPC). Chinese vice premier Liu Yandong awarded scientists certificates at the ceremony.

Minor Planet No. 31230 was named after Tu, who won 2015 Nobel Prize in Physiology or Medicine for discovering artemisinin to treat malaria and saved millions of lives.