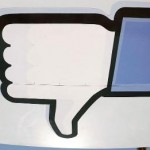 Facebook has finally unveiled a “dislike“ button -in the form of six new emoji, each representing their own feeling. They are in the form of emojis that represent “Love,“ “Haha,“ “Yay ,“ “Wow,“ “Sad“ and “Angry .“ The site will start rolling out the feature in Spain and Ireland, as a test. The countries have been chosen because they’re relatively closed groups.

The new buttons sit alongside the regular thumbs up as extra options. As with the Like button, the reactions will appear on any post in the news feed on mobile or desktop. Read More