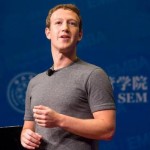 Facebook CEO Mark Zuckerberg held a townhall Q&A session at the Indian Institute of Technology in Delhi on Wednesday. This comes after Prime Minister Narendra Modi’s visit to the company headquarters last month where he answered questions from the audience at a Townhall meeting.

1:05 pm: “There is a trend that people decide to start a company and then think about what they want to do.”

12:57 pm: “Net neutrality is an important principle; we support it in terms of regulations and building an open platform for any developer.”

12:53 pm: “If Zero Rating allows people to access internet, then who is going to get hurt by that.”

12:52 pm: “It’s important that we have regulations that prevent people from doing things that hurt people.”

12:45 pm: “Working on a project where artificial intelligence can describe photos to blind people.”

12:36 pm: “The good thing about technology is you can build any superpower you want, he says when asked what superpower would he want.”.

Q: “What are future products we can expect from Facebook?”

A: “In 5-10 yrs we want to be able to build computer systems which can recognise things around world, translate language better, understand language better.”

12:24 pm: “In coming years, primary ways to consume information and share will be video.”

12:23 pm: A question on how to avoid candy crush messages gets huge round of applause!

12:20 pm: “With Free Basics, people don’t get access to rich medium but basic services which makes them realise why they need Internet,” he says.

What is Free Basics?

12:18 pm: “In India over a million people have access to Internet as a result of these efforts…,” he says.

12:17 pm: “Internet.org is live in 24 countries. 15 million people around the world now have access to Internet because of this initiative.”

12:15 pm: “India is the world’s largest democracy. If u want to connect everyone to Internet, can’t leave India out.”

11:30 am: “More than 130 million people use Facebook in India. I’m looking forward to hearing directly from one of our most active and engaged communities,” he says.

10:40 am: Students begin to queue up at IIT-Delhi…Read More